The Group For Women Celebrates Its 100th Anniversary 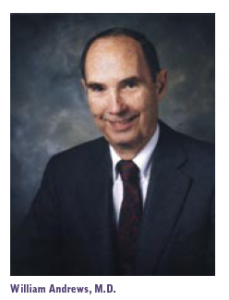 By Barbara L. Kersey, Ph.D.
When William Andrews, M.D., recently attended the annual American College of Obstetrics and Gynecology conference in San Francisco, he couldn’t help but think of his father.

There he sat, viewing a live telecast from Norfolk, VA of Jon Crockford, M.D., and Dwight Groves, M.D., of his own Group For Women, performing a laparoscopic supracervical hysterectomy. The OR was equipped with two flat-screen monitors, as well as voice-operated robots to control the operating table, lights and cameras. During surgery, there was two-way communication between the surgeons and a moderator in San Francisco. After surgery, the physicians moved from the OR to a nurses’ station, where they entertained questions from their distant audience.

One hundred years earlier, Andrews’ father had to open the doors of his medical practice as a “general practice” before he could even specialize in OB-GYN.

In 1905, 29-year-old Charles James Andrews, M.D., returned to his hometown of Norfolk, VA. He had recently completed medical 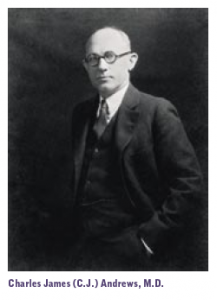 school at the Medical College of Virginia, an internship at St. Vincent’s DePaul Hospital in Norfolk (now Bon Secours DePaul Medical Center) and a six-month residency at The New York Lying In Hospital for Obstetrics. “At that time, an OB residency was six months long,” son William Andrews, M.D., said. “Later, for [my brother] Mason and me, it was five years.”
“C.J.,” as he was known to friends and family, and his wife, Jean, had three sons: Jim, Mason and William. Jim studied pre-med for awhile, but decided the theatre was his passion. At Yale Drama School, he became friends with Clare Booth Luce and Thornton Wilder. After, he volunteered for the American field service and was killed at age 27 by a mortar shell in Italy. Mason and William were left to fill their father’s shoes.

C.J. had definitive plans about where Mason and William should study medicine. He had decided on Princeton University for their undergraduate education and Johns Hopkins University for medical school. Mason was five years older than William, so he was first to leave home for Princeton. After he experienced its academic rigors, he phoned his father and told him to “send Billy to prep school, so that he’d be better prepared.”

With the exception of about a decade when he had an associate, C.J. Andrews ran his practice, originally called Obstetrical & Gynecological Associates of Tidewater, solo until 1950. “We’d hear the car back out of the driveway in the middle of the night, over and over,” Mason said.

William recalled his father’s O.R. schedule. “He’d call one day ahead and schedule two operating rooms. Then, on Wednesday and Friday, he’d work back and forth between the two rooms, performing surgeries most of the day.”
C.J. Andrews’ contributions to his specialty were recognized by his election as President of the South Atlantic Association of Obstetrics and Gynecology in 1949. (Mason Andrews, M.D., and Willette LeHew, M.D., were also elected to the same office in 1971 and 1992, respectively.)

By the time Mason Andrews, M.D., joined his dad’s practice in January of 1950, C.J. was in poor health, having suffered a stroke. In 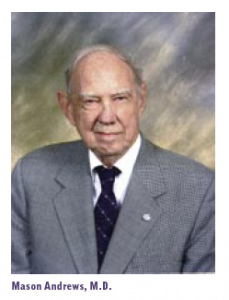 October of 1950, C.J. passed away, and Mason worked alone until his younger brother William could finish his residency at New York Hospital. (William’s residency had been interrupted by Naval service in the Korean War from 1950 to 1952.)

During the years when Mason ran the practice alone, his wife, Sabine, has recalled that Mason would come home after a day at the office and comment, “I’m trying to get as many patients as I can, so there will be enough to share when Billy comes … I think we’re going to make it. I saw eight patients today.”

Mason also remembered that, during this period, there was another local physician, Mallory Andrews, who would sometimes receive Mason’s midnight calls by mistake. Mallory would tell the answering service, “Send the patient to Labor and Delivery. Let Mason sleep another 30 minutes, and then call him.”

Sabine also shared the story of a woman in labor who was dozing in her hospital room and woke to find a man asleep on a stretcher near her bed. It was Mason!

Those years saw little sleep for Mason Andrews, whose family could not travel without his turning the practice over to someone else. When asked what he did on his always-on-call weekends, Mason gestures out the window of his river home to the stately live oak trees that dot the perimeter of his yard, “I pruned trees.”

Relief came when William finished his residency and joined the practice in July of 1953. Then, for more than a decade, the brothers shared the practice with a 36-hour-on, 12-hour-off rotation. Mason and William both practiced with the philosophy that “if the patient is in the hospital, we are in the hospital.”

On one occasion, the brothers were dining at the Norfolk Yacht Club and received a call that one of their patients was in labor and was bleeding. They left together, before dinner was served, and arrived at the hospital before the patient even arrived.

By 1965, the Andrews were anxious to include another partner in their growing practice. Assistance arrived in the form of Dr. Willette LeHew, who practiced with them for eight months, then was drafted into the Army during the Vietnam War and sent to Fort Campbell, KY. William described the relief at being able to be on call every third night, only to have to go back to every other night eight months later! In March of 1968, Dr. LeHew’s Army commitment was complete, and he came back to the practice to stay.

An Exacting Partner Joins the Team

The practice continued to grow, and more help was needed. In June of 1971, James D. Via, M.D., was finishing his OB-GYN residency at Norfolk General Hospital (a program Dr. Mason Andrews had worked diligently to create). Mason had decided to return to Johns Hopkins for a sabbatical, and Dr. Via was hired to take his place. Little did the Andrews and Dr. LeHew know they were hiring such an exacting man.

Seven-thousand-five-hundred-and-forty-seven deliveries. That’s how many times Dr. James D. Via has delivered babies since coming on board with the practice. For each delivery, Dr. Via has kept a record in his journal: date, patient, room number, time, chart number, parity, anesthesia, age, primary M.D., comments, husband (“there always used to be one,” he noted), c-section or vaginal delivery, weight, sex, time of delivery, Apgar scores. “Eighty of the 7,547 have been twin deliveries, with two sets of triplets, one of those identical triplets — very rare.” Calculator in hand, Dr. Via divided, “Eighty sets of twins — that’s one in 94, which is very close to the national incidence of twin births. In 2003 – 2004, my c-section rate was 17.6 percent.” Dr. Via is a man who cares deeply and precisely about his work.

The Last 30 Years: A Growth Spurt

The next physician to join the growing practice was Jon Crockford, M.D., in 1978. He was joined in 1985 by Dr. C. Dwight Groves. The following year, Dr. Crockford proposed the addition of a full-time Marriage and Family Therapist to the practice, and Dr. Barbara Kersey was hired as a mid-level provider. The idea was revolutionary at the time, and The Group For Women continues to be the only OB-GYN practice in the area to employ a full-time mental health professional.

By this time, most of Obstetrical & Gynecological Associates of Tidewater’s patients had been calling the practice “The Group,” because it was easier to say. So in 1987, the practice officially changed its name to “The Group For Women.”

The same year, its six male physicians decided to add a female to their team. Holly Puritz, M.D., joined the ranks, and quickly rose to share the role of Managing Director with Dr. Crockford. When asked about her experience coming on board to work with only male colleagues, Dr. Puritz has said the physicians were terrific and the adjustment seamless. “It was the patients who initially had difficulty accepting the idea of a female physician,” she recalled. “I would get asked, ‘Do you do everything the doctors do?’”

Dr. Puritz remained the only female physician in the group until the 1993 addition of Martha Fernandez, M.D., who became a Managing Director in 1999. The two were joined by Sharon Keverline, M.D., in 2001, and Giniene Pirkle, M.D., in 2003. Other recent additions to The Group For Women physician team include Jeffrey Wentworth, M.D., in 2000, and, most recently, Daniel Noffsinger, M.D., in August of 2005.

Like the founder of their practice, all the physicians who are part of The Group For Women feel a responsibility to assume leadership roles in their field. This is why, over the years, you have seen their names as Medical Staff President for local hospitals, Chairman of Mid-Atlantic Women’s Care, President of Virginia OB-GYN Society and President of ACOG. It is also why the group’s physicians often pioneer medical innovations, like laparoscopic supracervical hysterectomy, and new treatments for women with symptomatic prolapse. They are also regularly involved with pharmaceutical companies to implement clinical trials.

An Extended Family: The Group For Women Staff

Cindy Banwarth has worked as a Lab Technician at The Group For Women for 31 years. “It’s like family,” she said.
Kandi Nash, Office Manager and 30-year veteran of the practice, added, “This is a great group of people.” Dr. LeHew confirmed this as well, as he shared that when his wife, Myrene, passed away six years ago, the partners closed the practice the day of her funeral. According to Dr. Mason Andrews, the mission for his family’s OB-GYN practice has always been, “Let’s make the world a better place by taking good care of women.”

A 50-member staff, more than 75,000 deliveries and a live transcontinental telesurgery later, Dr. William Andrews added what his father may have thought: “He’d have been amazed.”

Moving into the second century of service to women…

As The Group for Women moves into its second century of service to women, the physicians have had to fill the “big shoes” of its founding fathers.  Mason Andrews left the practice early on to pursue other worthy endeavors; he was instrumental in bringing Eastern Virginia Medical School (EVMS) to Norfolk.  During his tenure there, Dr. Andrews achieved national fame as the physician who delivered Elizabeth Carr, the first in-vitro fertilization baby to be born in the United States.  Mason Andrews also served the City of Norfolk as a City Council member and as mayor, 1992-1994.  He remained active at EVMS until his death in 2006.

The second generation Group for Women physicians, Drs. Via and LeHew, retired in 2006 (LeHew) and 2007 (Via).  In 2007, The Group for Women continued to add to its esteemed physician panel with the addition of Dr. Denise Harris-Proctor, a graduate of both Princeton University and Vanderbilt University School of Medicine.

Another female physician was added in 2010, Dr. Kimberly Stockmaster, making the group’s physician pool over half female. The next year that number was balanced with the addition of Dr. Mehdi Parva.

The Group for Women maintains strong ties with EVMS in that all 10 physicians are EVMS faculty and are involved in resident training. The Andrews brothers’ dedication to the exemplary practice of medicine was noted in 2009 with the naming of Andrews Hall at EVMS.  As a group, our physicians maintain their dedication to providing excellent patient care and education for tomorrow’s medical professionals, still honoring the Andrews family’s mission of “making the world a better place by taking good care of women.”